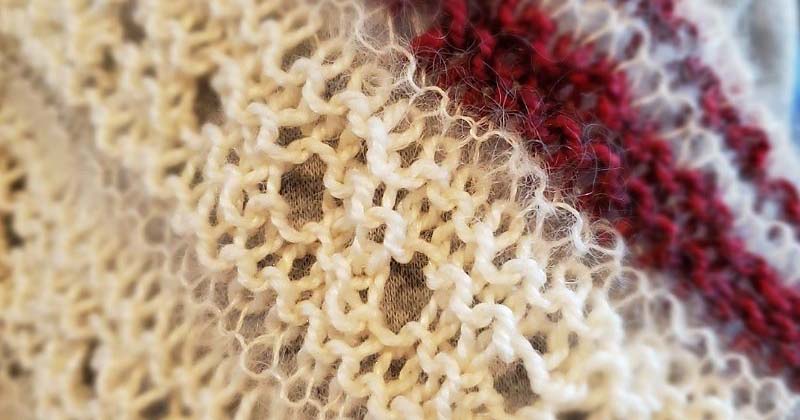 When I was a new knitter, I thought that I’d get to a point where I wouldn’t make mistakes anymore. Now that I’ve been designing sweaters and such for about five years, not to mention that I co-create a creative knitting magazine, I should be considered an “expert,” right? So no more mistakes, right? I suppose that’s along the lines of thinking that Danika Patrick will never crash a car, or that Phil Mickelson will never chip over the green. Whoa, what’s with the sports references? Do Betty Crocker’s souffles ever collapse? Does Betty White ever forget a line? Do supermodels get taco bellies after lunch?

I was going to write about my memorable knitting mistakes, but the one I most wanted to share with you actually turned into an Epic Knitting Save, and that’s a much more cheerful topic! And in the most optimistic of terms, it wasn’t even a mistake so much as a sudden and drastic design change. By “design change” I don’t mean “design element,” that little white lie we tell ourselves when we’ve decided not to fix a mistake, but a complete tearing out of the middle of a project. Not the part I was working on either, but about two feet back.

It’s December ninth and our first Knitmas MKAL (mystery knitalong, in case we have any non-knitting fans) is scheduled to start on December 26th. I absolutely hate the lace motif I created for Day Three. I’ve already knit through Day Nine, there’s barely going to be time to tech edit as it is, and I absolutely cannot frog back right now. You all may appreciate this: we didn’t even have the idea to run this knitalong until after Thanksgiving. No pressure, right?

So there I was, hating my first ever mystery design, with no time to frog, no yardage cushion, and no time to start over. I thought about photo-shopping out that section and writing the knitting pattern how I wanted it to be, but it turns out that photoshop doesn’t really work that way in real life.

I decided to keep knitting because what else could I do? Right? I had to push through with the shawl, trying to quell the anxiety until I could figure out a solution because the clock was ticking. Did I mention that issue six was due to the printer the last week of December? No?

Fate intervened on December tenth in the form of Joji Locatelli. I have admired Joji for years, and if she isn’t an expert knitter, then I don’t know who is. If you’re not familiar with Joji, please go check out her beautiful designs. So there I was that day, dejectedly scrolling through Instagram, wondering what in the H – E – double hockey sticks I was going to do about this Knitmas shawl that I had grown to detest. I couldn’t believe my eyes: Joji was taking length out of the middle of a shawl by “surgically” grafting it back together! Whaaaaat?!?! I could do that! Sure, she was an actual physician in real life, but I’ve seen all 16 seasons of Grey’s Anatomy at least three times, so I’m obviously qualified to operate on a wool and mohair shaw!  Oh yeah, did I mention the mohair? Have you ever frogged mohair? Don’t. Just throw the whole project away. (You know I don’t really mean that, right? Well, sort of.)

The Knitty Gritty of “The Repair”

No one ever saw the original Day Three (I’m actually not even sure I ever showed it to Becky), so you may be wondering how bad it could have been to cause me so much angst. If it were just about appearance, I may have left it as-is (or as-was?), but there were myriad problems with it: 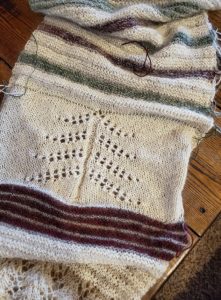 I painstakingly created a lace chart of a pine tree motif, with the idea that knitters could add on multi-colored bobbles to decorate it if they chose. Ummmm, can we say how not non-denominational that is? Also, Becky passionately hates bobbles and I really really wanted to throw some in there, just for her. I don’t love them either, but Knitmas was her eleventh-hour idea and I was feeling a touch spiteful (love you, B!).

Okay, so how did you do it? 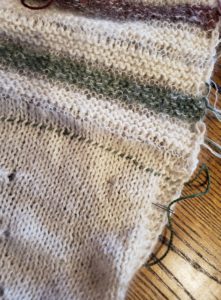 Step 1. I put in my first ever lifeline at the top of the motif, leaving two rows of Stockinette stitch above it (this will be important later). I had to look up directions for how to do it. It’s not that I’m so cocky confident in my knitting skills that I never thought I needed one; it’s more that I’m an inherently lazy knitter, and always optimistic that I’m perfection incarnate. 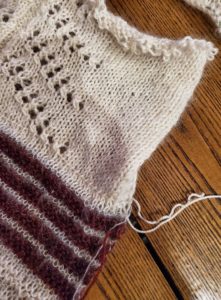 Step 2. I put in my second ever lifeline at the bottom of the motif.

Step 3. With the abhorrent section sandwiched between lifelines, I (don’t panic, it worked out okay) took out the scissors. Yep, taking out the scissors was its own entire step. Take a deep breath and read on to find out what I did with the scissors….

Step 4. I carefully (so, so, so carefully) cut the yarn just below the top lifeline. Have you ever knit an afterthought heel? It’s the same sort of situation – the lifeline holds onto the row above so it’s stable and safe. There might be a faster way, but I was scared and wanted to play it safe, so I just cut the yarn in one spot and carefully unraveled the row under the lifeline. My shawl was in two pieces. Two completely separate pieces. 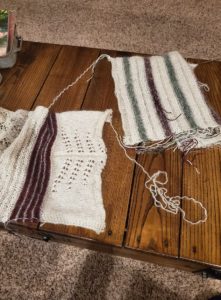 Step 5. This was supposed to be the easy and most satisfying step, frogging the panel down to the second lifeline. I say “supposed to be” because it was mohair held with wool, so it was really sticky. I didn’t even think about trying to separate the yarns as I wound them into another ball.

Step 6. I worked through my new Day Three, purposely working a new motif pattern that had Stockinette stitch as the background.

Step 7. wait for it…. wait for it…. I Kitchenered the blessed thing back together! I did it so carefully that I can’t see the grafting seam, even with my self-critical eye, and even though I know exactly where it is.

Step 8. I poured myself a tall, strong drink and gave myself the rest of the night off. 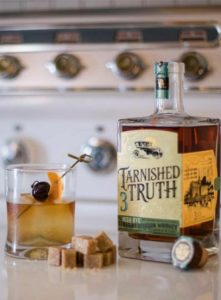 Friends, I learned so many lessons from that experience. First and foremost, to plan so much further ahead for any sort of knitalong. Knitmas 2020 is already knit, blocked, written, edited, and being tested right now! In July! I can’t promise it’ll be perfect, but we’ll be so much better prepared this year. Unless some weird 2020 twist intervenes, like an invasion of giant wool-eating moths. Okay, so I just typed “giant moths” into Google, and there are actually giant gypsy moths that were invading Washington state back in May. It’s just all too much…. 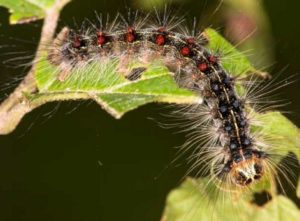 Don’t you think this photo is a little bit anti-climactic? I was totally picturing giant winged bugs, not in their caterpillar form, but in full-on fight or flight mode. Like this giant convolvulus hawk moth: 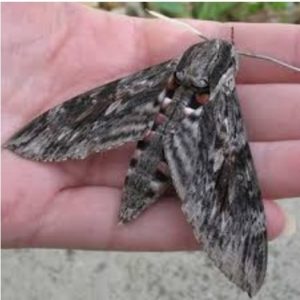 So now that you’ve heard about mine, tell us about your epic knitting save! Not the tiny design elements that no one but you can see, or the time you tinked back a few rows, but the really big surgeries that left you feeling like a superhero. Or tell us about that epic knitting fail that couldn’t be saved. Who knows – if you still have the project, maybe someone else in our amazing group of knitters can help you save it!

Hop on over to Instagram or to our Facebook group, Knit the World, and tell us all about your #epicknittingsave. One of the posts with that hashtag will win a digital copy of issue seven : michigan the minute we release it!

PS: Knitmas 2019 is free on Ravelry – click on the photo of Becky and I to download the knitting pattern.

PPS: Be sure to check out our latest issue, Michigan, and sign up for a knitting magazine subscription or pick out a beautiful pom pom for your next hat!

PPPS: Make sure to sign up for our knitting newsletter, too! Well, knitting-adjacent anyway. Every so often, we’ll treat our readers to free knitting patterns, so you definitely don’t want to miss out.